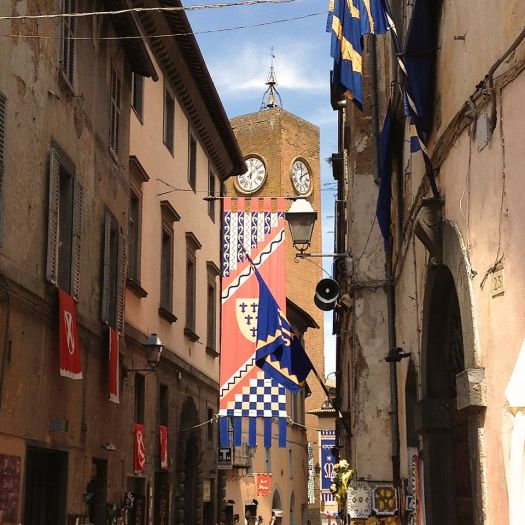 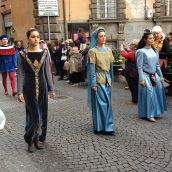 On June 1, I traveled to Orvieto, to check out the annual historic and religious procession in this ancient Umbrian town for Corpus Domini (also known as Corpus Christi). In 1264, Pope Urban IV established the holiday from Orvieto, where he was living at the time, which is one reason why the event is the most important to the Orvietani, following Christmas and Easter.

I’m not a Catholic, so once again this was a great learning experience (and for any Catholics who may read this, mea culpa in advance for anything I get wrong! I never went to Sunday school. Instead I got most of my religious education from Andrew Lloyd Webber: “Jesus Christ Superstar,” “Joseph and the Amazing Technicolor Dreamcoat”—religion seems to me a strange thing, mystifying). 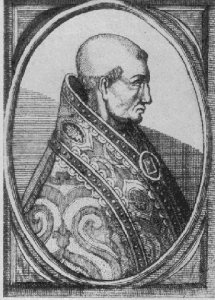 So back to what I learned on this search (and sadly, Gian Lorenzo Bernini, my 400-year-old boyfriend, doesn’t have much to do with Orvieto, so he doesn’t really figure in this search): Pope Urban IV established Corpus Domini as a holiday to encourage commemoration of the Eucharist, established at the Last Supper, when Jesus reportedly consecrated bread and wine and gave them to his disciples, saying, “this is my body,” and “this is my blood,” and urged his followers to repeat the rite in his memory.

Pope Urban hoped the new holiday would stanch some of the “heretical” movements at the time and reinvigorate deference for the Eucharist.

A tapestry depicting the Miracle of Bolsena

This year, 2013, marked the 750th anniversary of the Miracle of Bolsena, which seems to have prompted Pope Urban’s idea to create the new holiday. The miracle occurred in 1263, when a doubting priest, while celebrating Mass in Bolsena, looked down and found his hands covered in blood. The blood had begun to drip from a consecrated statue of Jesus. The parishioners delivered a cloth used to collect the blood to Pope Urban in Orvieto, who absolved the shaken (and presumably now-committed) priest.

(The journey of the cloth from Bolsena to Orvieto is recalled with a midnight walk during Corpus Domini, which my friend and newly minted Orvietana, Toni DeBella, completed this year. All six hours of it. In the pouring rain and through muddy forests in the pitch black. Arriving around 6 a.m.—for Mass. You can check out her story about it on Italian Notebook.)

And so, as part of Orvieto’s Corpus Domini procession, the holy cloth—which is kept safely protected in the duomo the other 364 days of the year—is accompanied through the town by a parade of citizens in jewel-toned costumes. 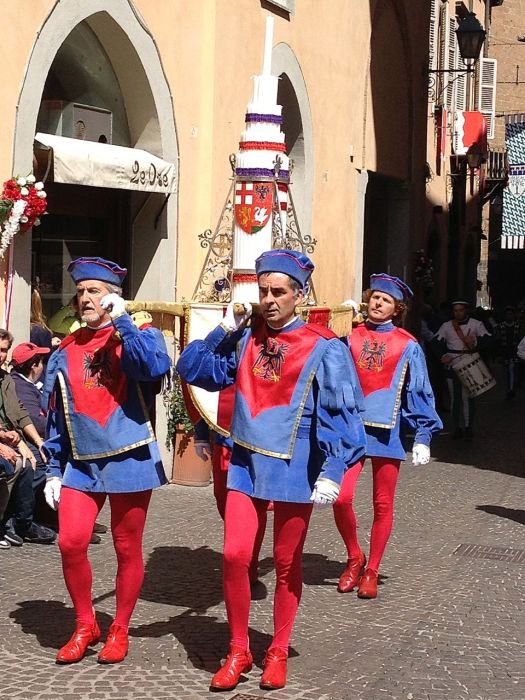 It’s a true living history event. With some dramatic entrances:

On Saturday afternoon, the festivities begin with the Corteo delle Dame e dei Popolani (Parade of Ladies and Peasants). They’re accompanied by drummers and the occasional bagpipe. 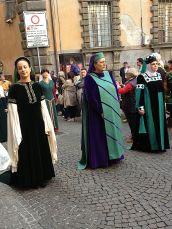 The women of Orvieto 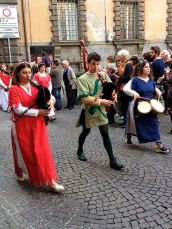 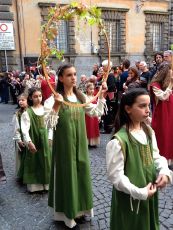 Girls of all ages dress up

Orvieto was (and is) divided into four quarters—Corsica, Serancia, Olmo and Santa Maria della Stella—each represented by different flags (I don’t believe these below represent the four, but it gives you the idea).

Unlike the Corteo delle Donne, which included some men, on Sunday, the parade consists exclusively of men (natch!). But some of them were just as pretty to look at.

The procession includes representations of the municipal courts of the time, coats of arms and weapons of the noble families of Orvieto. 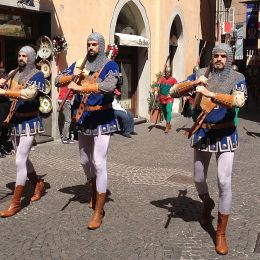 Also represented are the various guilds of the town, from barbers to ironworkers, bookmakers and vintners. They all have their own colorful banner.

Bookmakers’ guild (I believe) in the center

At the duomo, at the end of the day, priests ceremoniously return the sacred cloth for safekeeping—accompanied by a crowd of devoted citizens who form a candle-light parade inside the magnificent cathedral, while the impressive organ booms out notes from what I think is Handel’s “Messiah.”

If you want to hear a tiny snippet of the organ music, click here! Ciao!

“I wear a mask, and indeed must do so, for without it no one could live safely in Italy.”—Paolo Sarpi

While enjoying an aperitivo on Orvieto’s Corso the other night, I ran into my friend Toni DeBella, who was chatting with some visiting Americans—a very cool couple, Benjamin Orbach and Ashley Kushner. (Ben is the director of America’s Unofficial Ambassadors, dedicated to increasing the number of Americans who volunteer in the Muslim world, and author of Live From Jordan; Ashley works for the State Department.)

Over a glass of vino and several small dishes of complimentary snacks (gotta love that Italian tradition), we talked about their work and time they’d spent living and working in Israel. Toni described to them a situation in Italy that has frustrated an Israeli friend of hers, who lives in Rome. “The Italians won’t just come out and say something straight to the point,” her friend has complained. “They talk ’round and ’round and you never get a straight answer or opinion.”

Welcome to the land of dissimulation. Webster’s defines the word as “hiding under a false appearance.” Apparently Romans practiced it in Bernini’s day—the 17th century—as well, and probably long before then.

[/caption]My Italian isn’t yet good enough, and I haven’t had enough time here to experience this myself, but as I was reading a biography of my 400-year-old boyfriend, Bernini: His Life and His Rome (by Franco Mormando, Univ. of Chicago Press, 2011) in bed that night, I came to a section called, “I Beg You To Dissimulate,” and it explains what Toni’s friend has been up against.

[/caption]Mormando writes that Queen Christina of Sweden, one of Bernini’s powerful friends, said, “To be unable to dissimulate is to be unable to live.”

In the courts of Europe, and especially in Vatican-controlled Rome, no one would say what they really thought or meant for fear of harsh reprisals (in 1600, Italian philosopher Giordano Bruno was burned at the stake in the Campo dei Fiori for his opinions). There were even treatises published about the art of hiding your true meaning: “On Honest Dissimulation,” writes Mormando, was “the Baroque handbook par excellence on the art of survival in an age of divine-right, absolute (but nonetheless insecure and paranoid) government.” That’s going on my list for my “Searching for Bernini” quest! (See About.)

[/caption]The risks of speaking one’s mind, especially if it went against the general consensus of the times, were great: Galileo was one famous victim—What? You say the world revolves around the sun? Basta! To jail with you!

And think of the Inquisition. So thinkers and artists, like Bernini, who dealt with powerful, rich patrons, had to guard their tongues. One wrong word could destroy a career or even end a life. So Bernini learned to keep his true opinions to himself.

He was a master of deception in his art, as well—hiding how difficult it actually was to make marble look as pliable as flesh. His deception in his work resulted in an appearance of effortlessness.

But regarding speech, Mormando quotes from The Life of Gian Lorenzo Bernini, by the artist’s son, Domenico, who wrote, “When it was not possible to praise a work [of art, Bernini] preferred to remain silent. When it was absolutely necessary for him to comment about a painting, he found ways to say nothing even while saying something.”

Ecco la! There you

[/caption]Ecco la! There you have it: Toni’s friend was merely experiencing a true Italian tradition, part of a long cultural history in which the wrong word could wind up sending the speaker to jail, or worse. In Rome today that wouldn’t happen (although I wouldn’t cross the mafia dons just to find out), but the art of the practice—like Bernini’s own works—hasn’t been forgotten. Che ci voi fare? (What are you gonna do?). Just go with it. And have pazienza!

In my search for Bernini (see About), I’ve begun in Orvieto, where I’m staying with friends. Orvieto is a beautiful Umbrian city on a hill. Actually, on a “tuff”—a name for the volcanic cliffs out of which the town rises above the countryside. It’s got a rich history, having been around since Etruscan times. The city flourished in the middle ages and is where Thomas Aquinas taught before moving to Rome to serve Pope Clement IV.

What it’s best recognized for today is the magnificent Duomo.

I’ll write more about the cathedral in a later post.

In my first week here, I strolled the streets of the town just to get a feel of Orvieto in Spring. The gente (people) walk out in the mornings and evenings, running errands or taking a passeggiata (walk about). What did I discover on my first “searching” outing? A lovely town, beginning to stir to life after a cold, dark winter. The tourists are arriving in greater and greater numbers, but there’s still a sleepy sense of quiet that this New Yorker is struggling embrace. I’m searching for Bernini, my passion, but what I’m finding in Orvieto is a sense of calm. Which, after my frenetic life in Manhattan, is probably a good thing. It’s a way to cleanse my creative palate as I begin my search….

The Corso Cavour is Orvieto’s main street, running East/West through the town. It’s where the cittadini (citizens) go to see and be seen. 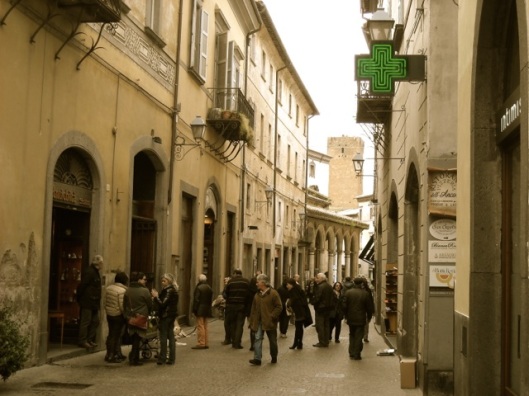 Biscuits and other goodies

You might occasionally get the feeling you’re being watched… 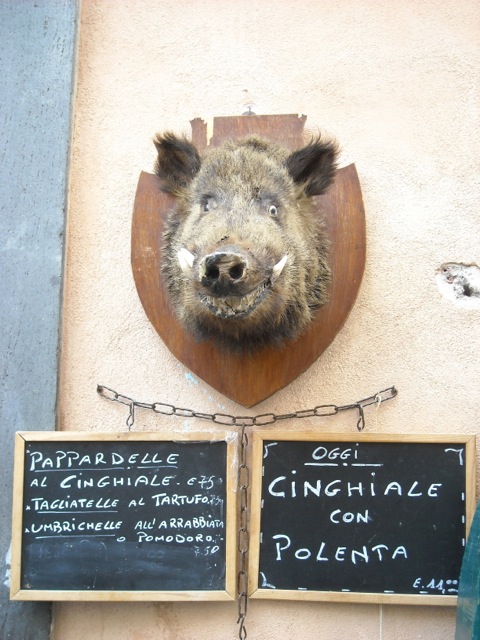 Cinghiale: wild boar that is a Tuscan staple. 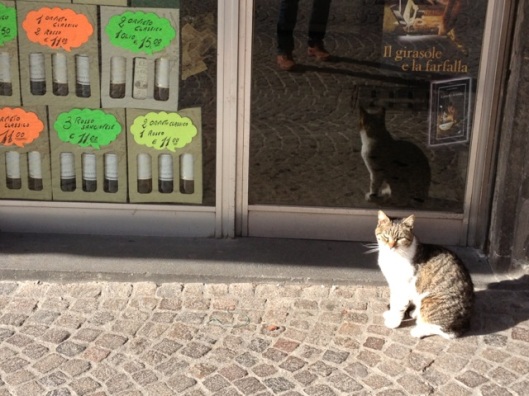 But you can always duck into one of the many quiet alleyways. 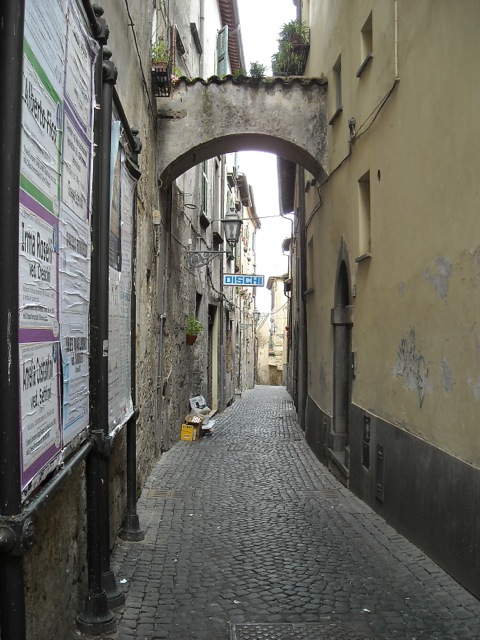 Wandering to the west end of town, there’s a beautiful view over the tiled rooftops:

And the occasional hidden garden…

Garden at Palazzo Filippeschi built by the Simoncelli family

Returning toward my friends’ house (I’m staying with Linda Martinez and Steve Brenner, owners of the delightful Rome budget hotel, The Beehive), you pass through the Piazza della Reppublica and catch a glimpse of the 13th-century Torre del Moro, rising high above the town, and the bells of which peal out across the countryside each hour. 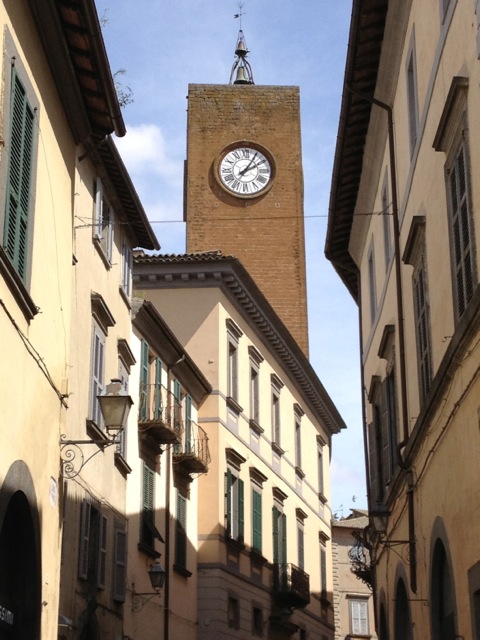 The Torre can be climbed for a magnificent view of the Umbrian countryside. And after scaling the 300 steps, a delicious reward awaits at the Trattoria del Moro-Aronne. I recommend the Umbricelli al Tartufo!