This week I met three women in Rome who have fascinating personal stories. Ok, I didn’t meet them literally, since they all lived a century or more ago. But I learned about them and they brought to mind that old college application question: With which historical figure—alive or dead—would you want to have dinner? Of course, my first choice is Gian Lorenzo Bernini, but beyond that, how interesting a dinner party would be with these three women in attendance. Meet my first guest:

The Pamphilj family is an old Roman one, and they rose to their greatest heights with the election of Giovanni Battista Pamphili as Pope Innocent X. (He also became a patron of Gian Lorenzo Bernini, albeit reluctantly since he didn’t want to show favor to an artist who had been so tight with his predecessor, Urban VIII). 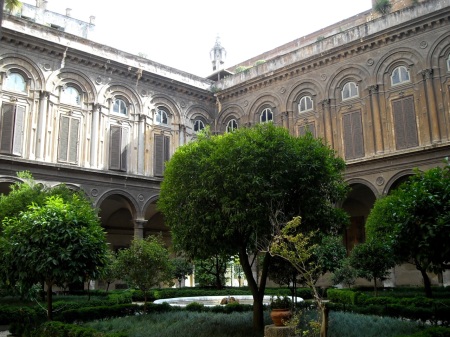 I visited the Pamphilj palazzo this week on Via del Corso, and was blown away by the old-world charm of the place, and the fact that some members of the family still live there today—the audio tour is conducted by Prince Jonathan Doria Pamphilj with a friendly warmth and in his upper-crust British accent. From the tour I learned quite a bit about the palazzo and the artwork, and especially about his ancestor, Olimpia—one of the most revered, feared and, at times, hated women in Rome.

When Giovanni was a Cardinal, Olimpia married his brother, Pamphilio Pamphilj. But according to Jonathan, she may have been the lover of the Cardinal and she was instrumental in promoting him for pope. Pamphilio died in 1639 and when Giovanni was elevated to the pontificate in 1644, Olimpia is credited with essentially using her political savvy to steer him through the dense hierarchy of the church. And she remained, more or less, by his side throughout. In fact, she gained so much power that she became known as “la papessa,” or, even less flattering, “la pimpaccia.”

She was reportedly a woman with very strong political and financial ambitions and while some sources I’ve read say—and even Jonathan Pamphilij admits—she wasn’t the most pleasant person, I have to wonder how much of the animosity around her is because she was a strong, powerful woman who was not willing to stay in her place.

It seems even the artist commissioned to create her bust, Alessandro Algardi, didn’t like her very much: or at least wanted to show the “real” Olimpia, in his scowling, bloated portrait (above). But she nevertheless still looks pretty powerful!

When the pontificate turned over and Bernini had to cozy up to Innocent in order to make sure he still received his lucrative commissions, he knew who to call on: Olimipia (according to Franco Mormando’s Bernini: His Life and His Rome). Ever a wily politician, Bernini wrote a play for her in 1646 that shockingly poked fun at his former patrons, the Barberini (which included Pope Urban VIII) and was filled to a “candal-raising degree with sexual double entendres,” reports Mormando.

Jonathan Pamphilij gives this example of Olimpia’s own clever political maneuvers—which also shows her greed: She convinced Pope Innocent that it was immoral for the Vatican to collect taxes from brothels, and instead, he sold her the right to collect the taxes. She even went so far as to hang the Pamphilj family coat of arms over the doors of her brothels so that the police, who might otherwise harass and raid them, would leave them alone. No one had the guts to go up against the Pamphilijs…or Donna Olimpia!

Olimpia may even have been instrumental in ensuring that Bernini got the commission for the Four Rivers fountain in the Piazza Navona.

With Francesco Borromini—Bernini’s great rival—also in the running for the commission (which involved diverting water channels in Rome to Navona), Olimpia reportedly made sure that Innocent saw a model of Bernini’s proposed sculpture for the fountain one night at dinner by placing it prominently in an area by which the Pope would pass. And apparently, that was all it took! (Poor Borromini, foiled again.)

But her power finally ran out when visiting dignitaries began calling on her first, before greeting Innocent X, and he kicked her out of court. She outlived Innocent X and reportedly refused to contribute to the payment for his funeral. She definitely sounds like a piece of work, but how interesting that she managed to gain such power, against all odds, in such a patriarchal society.