When to eat, what toilets to visit…and Bernini’s biggest rivalry revealed in stone! 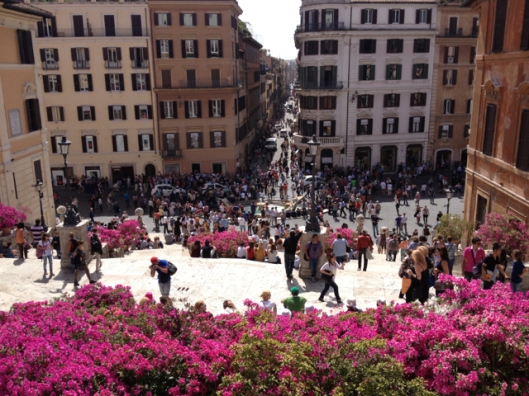 I love to eat. Who doesn’t? And I’ve been fortunate, here in Rome, to meet all kinds of real food and restaurant experts who’ve shared tips and information about cuisine and restaurants in Rome and the wider world as a whole. (If you’re interested in learning more about them, I’ve added links to their blogs and sites at the end of this post.)

On Paolo’s tour of the Piazza di Spagna area, we learned a little bit about dining in Rome, and then we got to the real meat (for me) of the tour: a delicious discussion of my 400-year-old boyfriend, Gian Lorenzo Bernini, and his bitter rivalry with another artist and architect, Francesco Borromini. But first, food…. 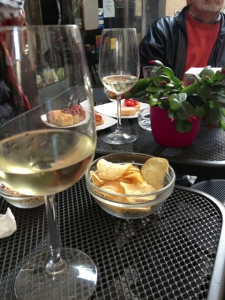 1. Avoid eating like a tourist. The Romans, Paolo tells us, dine at fairly specific times. True Italians eat lunch between 1 and 2:30 p.m., have their aperitivi (beverages and small snacks, like olives, potato chips, formaggio) around 5:30-6 p.m., and dinner around 8:30-9:30 p.m. So, all the people sitting at cafés at three in the afternoon on the quaint, cobblestone streets around Piazza di Spagna are almost certainly tourists.

What’s more, at the off-times, the food is different—and not as high quality—as that served during the Roman lunch or dinner hour, when the restaurants whip up their best meals. For those tourists sitting down for a late lunch at 3 p.m. (of which I’ve been one, many times—guilty!), the food is often second-tier. Oops. 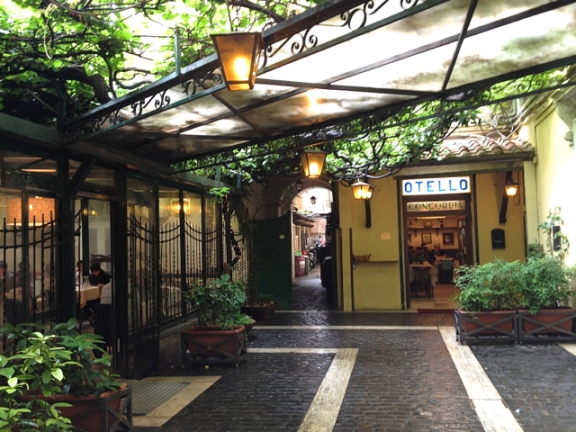 For a good, traditional Roman meal, Paolo directed us to Trattoria Otella alla Concordia, which lies beyond the madding crowd. This is a real Roman restaurant—the kind of place the locals frequent, and when we walked by, at around 3 p.m., it was deserted. The restaurant has been family run for 70 years, but goes back as far as the 1700s, when it was an inn that hosted artists, novelists and poets. I went back a few days later for a delicious lunch of rigatoni all’amatriciana. Buonissimo!

Rigatoni all’amatriciana at Trattoria Otello alla Concordia. You can check out their menu here. 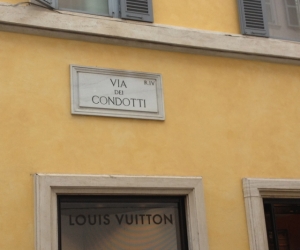 2. How Via dei Condotti got its name: Condotti means “channels” or “ducts” in Italiano, and underneath Via dei Condotti are pipes that carried the water to the Baths of Agrippa. Today, there are still pipes beneath the street that carry water to parts of Rome, like Piazza Navona and Campo dei Fiori. 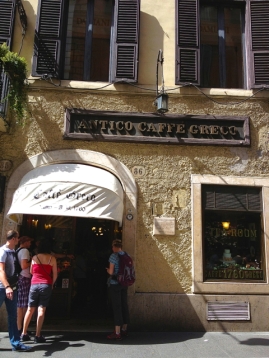 3. Rome’s oldest coffee bar is Caffé Greco, operating since 1760, at Via dei Condotti, 86. Artists and writers like Stendhal, Keats, Shelly and Casanova enjoyed a coffee here. One tip from Paolo: Order a coffee at the bar inside to the right of the front door (if you can make it through the crowd), and then walk back through the café to use the toilets—it’s a good way to see the place without paying the exorbitant prices charged at the tables (although your coffee will be served in white-gloved fashion by elegant waiters, if you choose to pay). 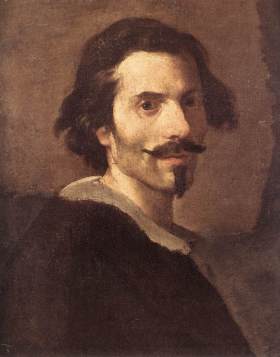 4. Bernini vs. Borromini, the big rivalry, summed up in one building. Now, the really good stuff! Pope Gregory XV founded the Sacra Congregatio de Propaganda Fide, or the Sacred Congregation for the Propagation of the Faith (how’s that for a mouthful?) in 1622 as a center where the Church arranged missionary work. It was, and still is, based in Palazzo Ferratini. Pope Urban VIII developed the site into the Collegio di Propaganda Fide, for training missionaries, and in 1634 he commissioned Bernini to build a chapel and spruce up the palazzo. 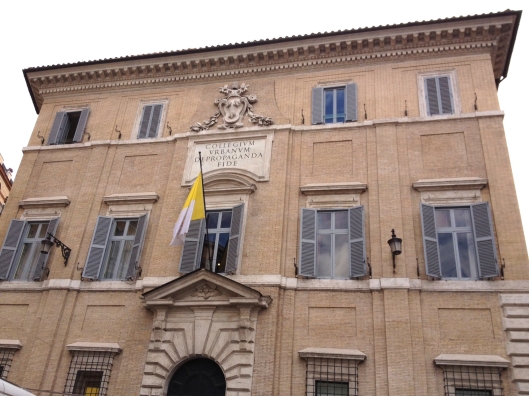 Bernini got started, and the façade is a Baroque design that is more restrained than might be expected; with classical lines, it stands with quiet dignity along Via di Propaganda and looks out over the edge of the Piazza. But Bernini really wanted the commission to work on St. Peter’s, and when that finally came through, he abandoned the Propaganda building and left it to his rival, Francesco Borromini, to finish.

Paolo, a fount of information on Bernini, walked us around to the side of the building where you can see visible evidence of how the two men’s perspectives on the Baroque, and their philosophies regarding life and politics, diverge. Bernini, as I wrote in an earlier post, was a consummate politician and courtier—earning the respect (and commissions) of popes and keeping them happy by always saying the right thing (or sometimes saying nothing, which turned out to be the right thing!). Borromini, on the other hand, was more emotional, could be histrionic, and ultimately committed suicide. He had the stereotypical artistic temperament. 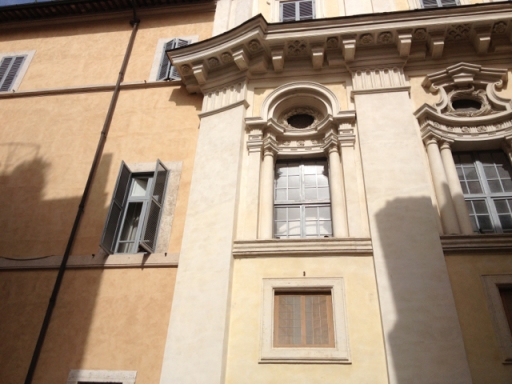 Bernini vs. Borromini, written in stone

Here, you see where Bernini’s work ends and Borromini’s begins. Bernini believed art should express reality—his sculptures reveal this, especially—they are so lifelike the marble looks as soft as human flesh. In his architecture, in this case, Bernini opted for a celebration of rationalism—organized, restrained, where every line makes logical sense. His philosophy of religion (and, perhaps, life), said Paolo, was, “If I follow the rules, I’ll go to heaven.” Full stop. 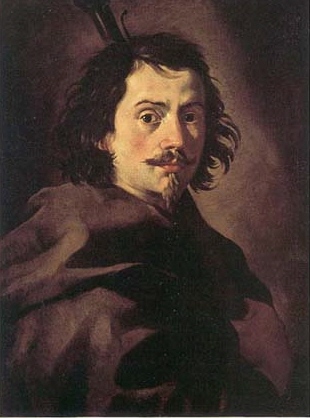 Borromini, on the other hand, was more of a mystic. His emotional philosophy tended more toward, “Please save me! Hey, I’ll try this with my building! Do you like it?” His eventual arrival in Heaven was not, for him, destined merely by following “the rules.” Salvation had to be earned, and was not determined by a clear path.

Borromini’s part of this palazzo, therefore, looks like a separate building. Not only did he use different materials, he also created round windows, and added pilasters and architectural flourishes that are nowhere to be seen in Bernini’s design. As much as I love my boyfriend, Borromini’s part of the palace is more fun to look at, I think!

5. Palazzos can move—literally! The final “secret” Paolo shared with us is this: When Via Nazionale, a main street that connects the main train station, Termini, with the city center, was built at the end of the 19th century, the street passed through parts of Rome where numerous palazzos sat. So what did they do? They moved them out of the way! It must have been quite the enterprise, but instead of destroying the structures to make way for modernity, the palazzos were lifted and moved back, to make room for the street. What a feat of engineering! Ciao!

Katie Parla, an American who’s been in Rome for 10 years, she’s a restaurant critic and writer who contributes regularly to the New York Times and works with other women in Rome to produce The Rome Digest, an online magazine about food, wine and happenings in Rome. She has an app: Katie Parla’s Rome, which I’m finding invaluable (available on iTunes).

Rachel Roddy, a British writer, blogs about food from Rome. Her recipes are irresistible and they’re helping me (a non-starter in the kitchen) improve my cooking! Check out her blog.

Hande Leimer, a Turkish sommelier, hosts wine tasting events through her company, Vino Roma. She’s incredibly knowledgeable and experienced and her tastings are not to be missed! She works with Katie Parla on The Rome Digest.

Simran Sethi, an American who’s in Rome researching a book on the biodiversity of seeds is one of the most impressive women I’ve met here. She’s an expert in her field and if you want to learn more about her work, check out her website.

Watching #oscars2020 with this one.
Just when you think things are hopeless and America is dead, friends invite you to their lovely apartment in Queens to hear the @newcamerataopera and you realize there’s still beauty in the world.
Annapolis in the evening. #nofilter #peace
Cat in the box.